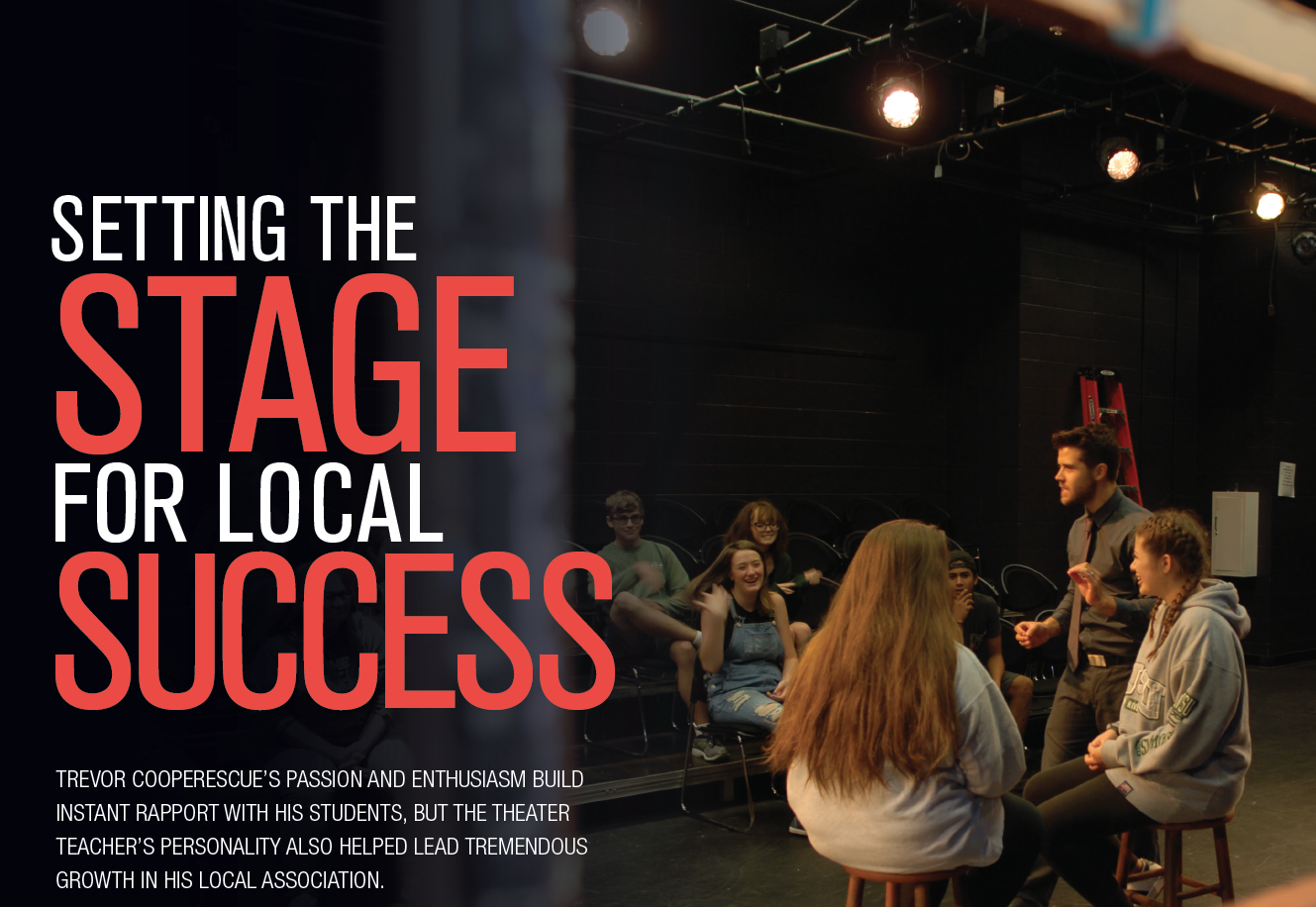 “Every theater class we start with an exercise to warm up our body, mind and voice,” he says.  “We stretch because acting is physical. Theater is more than acting, and memorizing lines.”

Students laugh and jump in a circle, led by a teacher who is living his dream.

“Theater is my life,” he says. “I’ve always loved musical theater and I always wanted to be an actor someday.” Cooperescue’s high school in Harrisburg didn’t have a drama department, so in his junior year, he convinced his English teacher to build one.

“I begged her and she actually went and got certified in theater,” he says. “We created a drama class and I helped her plan and direct and I acted.”

He left college early to pursue a theater career in Chicago, but ran into the writers’ strike.

“If Julia Roberts couldn’t work, neither could I,” he says. “I decided it was time to go back to school and finish my degree.”

While studying, Cooperescue says he developed a new enthusiasm for education.

“I always thought of my younger self, if I had known more in high school, if I’d had more help, more support… I wasn’t ready and there was so much more I needed to have under my belt before I made it into the big world,” he says. “I didn’t want to just be famous anymore. My dream was to get to have a kid make it.”

After the warm-up exercise, a student delivers a monologue, but Cooperescue stops him after a few sentences. He asks for a volunteer, and tells the students to lock hands and push against each other during the performance.

The teen’s delivery instantly changes from a recitation of memorized lines to a heated fight to get the words out.

“You go ‘Wow! I’m interested,’” he says. “It brings the audience in. If you looked into the audience, all of the kids leaned forward when it started. They’re now engaged, which is the hardest thing as a teacher today with technology at our fingertips. Engagement of students is so difficult.”

One year into his new career, Cooperescue’s desire to learn new ways to engage students and connect with other educators led him to the Arkansas Education Association.

“FHS is such a large school you can kind of get lost,” he says. “I was needing a family or somewhere I could go to, because I had my theater colleagues, but I still wanted other connections.”

Cooperescue attended a Fayetteville Education Association meeting and afterwards called his mother, who’s also a teacher, to ask what she thought about AEA.

“My mom immediately jumped on me ‘Oh son, you haven’t joined that yet? I’ve been a member of AEA my whole life,’” he says. “She told me it’s because of AEA that we have duty free lunch, and that AEA is fighting through legislation in Little Rock to make sure public schools are being taken care of.”

When Cooperescue joined, the first monthly meeting he attended had about 8 people at a tiny pizza place on the Fayetteville square.

“We had a good time,” he says. “We talked about the pulse of the school and I got to voice my concerns and I got to see all the wins that were happening. I got really excited about it because it’s neat hearing other people’s needs or concerns and that I wasn’t alone.”

It wasn’t long before FEA’s longtime co-presidents decided the local was ready for a new approach, and nominated Cooperescue to take the helm. He declined at first, but after Anna Beaulieu (FEA’s Current President) agreed to be his vice president, he dove

“We looked at our local constitution that hadn’t been updated since the 80s and we decided to update it,” he says. “I took it on myself to create a local website to really bring the technology

in to reach more people, and thanks to our UniServ Director Chris Pearson, we started regular meetings with our Superintendent and Principal.”

Cooperescue built strong relationships with the administrators, and started bringing members’ concerns to the table.

“We went in not with a ‘gripe-fest’ but with a game plan,” he says. “We had suggestions of here’s what’s not working and here’s what we want to do as a team to make it better.”

As educators saw their issues being resolved, membership grew. 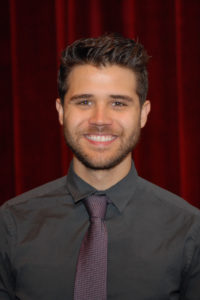 “Our meetings, we had to actually move locations from that tiny pizza place with 8 people,” he says. “We now have a local restaurant that houses us once a month and we have 30-40

members show up every month.”

Cooperescue says holding regular monthly meetings somewhere outside of a school building is key to building a community and engaging membership.

“Ours is the second Thursday of every month, at the same location, at the same time,” he says. “We tell our members you don’t have to stay the whole time. Come and go as you please.”

FEA also sends out an agenda the week before to make sure everyone knows what is going on.

“Communication is key in a local,” he says. “You need a strong local website that shows what’s going on with a page dedicated to your minutes or your agenda. Our site also includes an easy way to contact our president and board.”

Cooperescue teaches his students acting is connecting with others, and the most important person on stage is your partner. It’s a life lesson that also applies to FEA.

“It’s about working together and building something that is of value,” he says. “You have to put in the work and you have to trust each other and make it work together.”