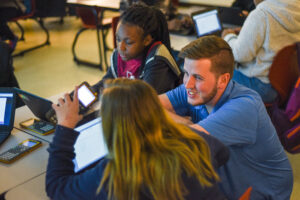 The students in Hosea Born’s 7th Grade math class seem especially engaged. It may be a love for circles, radii and diameters – or it may be Born’s enthusiastic questions as he scrawls formulas on his dry erase board.

With the lights down low, the kids’ eyes are fixed on the shapes, but in the back of the classroom, a blue bag with LAUNDRY written down the side offers a hint that math problems aren’t the greatest challenges some of these kids face.

“Over 70 percent of our students, live below the baseline of poverty,” Born said. “You’re not going to be able to meet achievement [goals] until you’re meeting their basic needs.”

As his class works on their daily assignment, one of his students from another period stops by with a question about her homework. Born answers this question with a question and waits patiently with a smile while his student works through it on her own. This patience should come as no surprise for anyone who knows Born. He enjoys working in the high poverty school because he was once in the same situation as some of his students.

“Education for me has been the way to escape poverty,” he said. “I grew up in a house where I was the youngest of ten. My parents did not believe in government assistance… There was a lot of abuse, neglect throughout the house. School was always that consistent thing for me.”

Growing up in Goodman, Missouri, a tiny town just north of the Arkansas border, Born says his elementary teachers countered the emotional and physical abuse and neglect in his home with extra attention and encouragement. “The typical love that a teacher shows was to me more than the typical love, because I wasn’t seeing that at home,” he said. “It was through school that my teacher showed me I could do more. I could be whatever I wanted to be.”

Born graduated near the top of his class and went on to college with scholarships. He decided he wanted to give back to the profession that changed his life.

Born graduated from the University of Arkansas in 2018, and through Arkansas Teachers Corps ended up in Hope, Arkansas, the birthplace of President Bill Clinton and home to the Hope Watermelon Festival. Now in his second year at Yerger Middle School, Born said being single in the town with a population of less than 10,000 offers him a chance to fully invest in his students.

“Hope doesn’t have a ton of stuff to do for a young professional,” he said. “I’m lucky in that sense that I’m on my own because I can give up my time and resources. That’s what rural schools need in general is just more resources.”

When he arrived in Hope, Born wasn’t surprised to find a bunch of bright kids, but he was surprised by the lack of opportunity for them to shine outside the classroom. Born now serves as the Parent Coordinator, hosts speech and debate on campus, and this year built an afterschool program with five other teachers offering different ways for kids to learn.

“On every Tuesday the kids stay after for an hour and a half and we work on project-based learning with math, science and (English Language Acquisition),” he said. “It’s something different from the classroom. You’re able to get away from the teaching to the test or preparing them for the test. You’re able to do the fun experiments, do hands on projects that, in the classroom with curriculum, you’re not always able to do.”

He also worked with a group of students on the FIRST LEGO League Challenge. This year the theme was based around cities, and participants had to solve a challenge that they found in their community.

“They found out there are about 13 percent of our students who walk home, yet there are no crosswalks around the school,” Born said. “They actually reached out to the city, figuring out how can we get a crosswalk put in. They were able to tape it down, paint it and see
that come to life.”

Born said seeing his students leave a lasting mark is an added benefit to seeing their energy and excitement as they develop a sense of accomplishment.

“It just really reinforces what my teachers saw, that little extra oomph,” he said. “They have so many abilities, that aren’t drawn out sometimes because of the situation that they’re in. Teachers will see a loud student rather than a student with a lot going on at home.”

He approaches these challenges with a sensitivity and understanding born of personal experience and says finding that outside activity for students to engage with often translates to a stronger investment in the classroom.

“It’s having a similar experience with them growing up, experiencing some of the same traumas that they experienced and knowing that they too can use education,” he said. “They need someone in their lives who cares about them.”

Born joined the Arkansas Education Association for the legal protection, but soon realized his membership brought much more. He quickly took advantage, attending the Summer Leaders SPARKs program and presenting at the 2019 AEA PD Conference.

“Once I saw the different opportunities and got involved in those opportunities that’s when I really saw the value of AEA,” he said. “It’s just a matter of reaching out and really utilizing those resources, learning about the different resources out there to support our students.”

Born learned how to look for new funding streams to help implement his programs, and AEA gave him confidence to speak up despite being new to the job.

“Even though I am just in my second year of teaching, if I see a problem I can actually go in and get that money,” he said. “It’s knowing that there are resources out there beyond the walls of the school… framing my voice in a way that is conducive to others and in a way others want to become a part… making sure that our schools have enough funding to provide for our students.”

He says early career educators shouldn’t be afraid to participate in conversations about what their students need.

“We don’t have experience on our side, but we still have our views,” he said. “What we do see, it’s a unique perspective and it’s a perspective that needs to be heard by others more because that perspective can help our students out more than we realize sometimes.”

His background also helps him to identify issues others might miss. After securing a grant to expand the school’s food pantry, Born realized there wasn’t a way to ask for help in a discreet way.

“I set up a Google form and that’s now available to all our students,” he said. “They can go in and fill that out at any point in time and get basic hygiene products get food for the weekends, get clothes if they need it.”

He plans to stay in Hope as long as he can be involved with the students there.