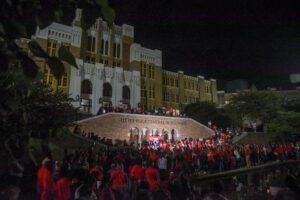 Community Pushes Back Against Privatization

On the eve of the Arkansas State Board of Education’s October meeting, thousands of Arkansas educators, students and community members held candles and sang in front of historic Little Rock Central High School. The vigil was called to protest a plan by the governor-appointed board members that would re-segregate the city’s students.

The demonstration again brought national attention to the steps of Central High, where in 1957, nine courageous students overcame hate-filled mobs attempting to block the students from desegregating the school. An overflow crowd showed up to the meeting the next day, and the board backed off the blatant segregation plan.

However, they also moved to end recognition of the Little Rock Education Association (LREA) as the bargaining agent on behalf of district educators and to replace it with a Personnel and Policy Committee. This move to silence educators came after 50 years of educators working collaboratively to improve the teaching and learning environment for the students in the LRSD. The meeting ended early to chants of “SHAME” from the audience packing the room. While community outrage reached fever pitch, the plan was just the latest iteration of an effort that had been brewing since before the state took over the district in 2015.

In 2014, Little Rock voters elected a majority African American school board in support of a reform agenda that pledged to provide more resources to the city’s highest needs schools and oppose efforts to close schools in African American neighborhoods. Three months later, the board seized control of the district and disbanded the new school board, saying the takeover was necessary because 6 of the 48 schools were struggling academically. Since then, four more districts, all with majority-minority student populations, have been taken over by the state.

A 2015 report on state takeovers released just months after the LittleRock vote found “the state takeovers are happening almost exclusively in African American and Latino schools and districts – in many of the same communities that have experienced decades of underinvestment in their public schools and consistent attacks on their property, agency and self-determination.”

In the Alliance to Reclaim Our Schools’ Out of Control: The Systematic Disenfranchisement of African American and Latino Communities Through School Takeovers, the authors continued: “In the past decade, these takeovers have not only removed schools from local authorities, they are increasingly being used to facilitate the permanent transfer of the schools from public to private management.”

Indeed, shortly after the takeover was complete, a bill to hand distressed schools and districts over to private operation was introduced in the state legislature. Written by Walton Family Foundation lobbyists, this bill would have allowed the charterization of the LRSD, like the failed New Orleans experiment. Community outrage blocked the bill, and it was ultimately pulled from consideration without a vote. However, the privatization effort continued.

Over the next five years, the state board and education Secretary Johnny Key made decision after decision that did not make sense for the LRSD or its students. State appointed Superintendent Baker Kurrus’s contract was not renewed after he made a data-driven case against a proposed expansion of two charter systems.

The expansion was approved, despite clear evidence showing it would drain students and resources from the district while duplicating services in areas where high-performing LRSD schools had open seats. Key then replaced Kurrus with Superintendent Mike Poore

Poore went on a public relations campaign while announcing the closure of several neighborhood schools. The closures were followed by the announcement of a second round of closures, as new charter schools and charter expansions continued to be approved by the state board.

Then in late 2018 the board voted to strip the Teacher Fair Dismissal Act and Employee Fair Hearing Act from Little Rock and the Pine Bluff School Districts, citing a law passed in the 2017 session. Act 930 also changed the rules for state takeover in the middle of the state’s floundering effort in Little Rock. The new law required schools or districts in “Level 5 Intensive Support” be annexed, consolidated or “reconstituted” after 5 years if they did not meet exit criteria established by the state. This criteria was not determined until the fourth year of the takeover, leaving educators little opportunity to meet the targets.

When it became clear the State control had failed and some schools would not meet the exit criteria, board members began a series of
“community meetings” to discuss the “reconstitution.” The term
was not defined in the law, and the board claimed to want community feedback on what steps should be taken. Audience members quickly realized the leading questions, described by one person as a poorly designed “push-poll,” seemed to be written in a way that would support the private operation of the schools still in need of
academic improvement. When the format of the “community” meetings was restricted to limit public comment, community anger boiled over. Public school advocates turned the meetings into demonstrations of opposition, with board members shouting back and forth at public officials
and audience members. Still, the state board seemed emboldened to continue its privatization plan. In the face of unprecedented community engagement and unification around a full return of the district to local control, the state released a plan to resegregate the Little Rock School District. The plan ignored the public testimony from meetings and feedback provided on an online poll, and instead seemed to mirror recommendations submitted by Walton Family Foundation lobbyist Gary Newton. Newton is also the nephew of the state board chair Diane Zook. 2019 Arkansas Teacher of the Year Stacey McAdoo, who also holds a non-voting seat on the state board wrote an op-ed on the plan that ran in the state-wide edition of the Arkansas Democrat-Gazette.

“Late last month, the State Board of Education endorsed a plan to give some schools in Little Rock their own school board so that their communities can have a voice in the education of their children,” McAdoo wrote. “That is the cornerstone of effective oversight in public schools across our country. It is what is right and what all parents and students deserve.

“But the State’s plan also mandates communities in other parts of Little Rock remain under state control and “different leadership.” Governor Hutchinson has stated that the difference between the two sets of schools is that those that won’t be in the new district are in “academic distress.” The real difference is that the schools in those black and brown communities will continue to pay full property taxes yet will have no input in school governance. It is a return to separate and unequal.” As the community continued to rail against the state plan and call for an immediate return of the entire district to local control, LREA, AEA and NEA began working with partners to raise awareness about the situation. Businesses across the city posted “We Support #OneLRSD” signs as community members wrote letters to the editor and held informational meetings to get more people involved.

Local and national news coverage highlighting Little Rock’s history and a return to school segregation flooded the airwaves, and the candlelight vigil drew 2,500 people to stand up for LRSD’s students, educators and schools. While the huge swell of support caused the board to back off the blatant resegregation of the district, it quickly became clear that the state’s new plan would also limit local control, reseating the school board more than a year beyond that allowed by law and preemptively blocking an elected board’s authority to make budgetary decisions, negotiate with LREA and hire or fire the superintendent.

“The Board’s action to eliminate the voice of educators in how students learn is shameful,” LREA President Teresa Knapp Gordon said following the vote to end LREA’s recognition. “To be clear, our community came together and demanded #OneLRSD with the voice of educators at the table. The board’s actions show that the state still is not listening to the community whose students will learn in these schools.”

In response, the LREA called for a one day strike on November 14th, the date of the next board meeting. Hundreds of educators and community members met on the picket lines in front of schools before demonstrating in front of the department of education and rallying on the Capitol steps.

Unfortunately, the board was not moved by the outpouring of support from the community. Again the board went against the advice of the state appointed superintendent and public comment to make changes to the Personnel and Policies Committee election that was about to begin. The meeting was forced to end early again when community members began chanting again and refused to clear the room.

“While our one-day strike was successful, it’s important to remember this is a marathon not a sprint,” Gordon said after the meeting. “The board’s actions today prove that they are still unwilling to listen to the community or even their own appointed Superintendent.”

LREA and community partners continue to stand in unison for their students, but the board continues to make destabilizing decisions against the advice of LRSD administration, educators, parents and community advocates. The community must prepare for school board elections to be held in November 2020, but it is still unclear how much damage will be done before the state returns at least partial control.

“We can’t overstate the love and appreciation we have for the community members who continue to give their time to attend these meetings and speak up for the educators who can’t be there during the school day,” Gordon said. “[The strike] gave the Little Rock community a living example of what can happen when dedicated and passionate educators come together with the community and stand strong for students. We know that when teachers stand together, the community stands with us. Together we will continue building on this success until we achieve a full return to a locally and democratically elected school board with full decision-making authority.”