is AR Teacher of the Year 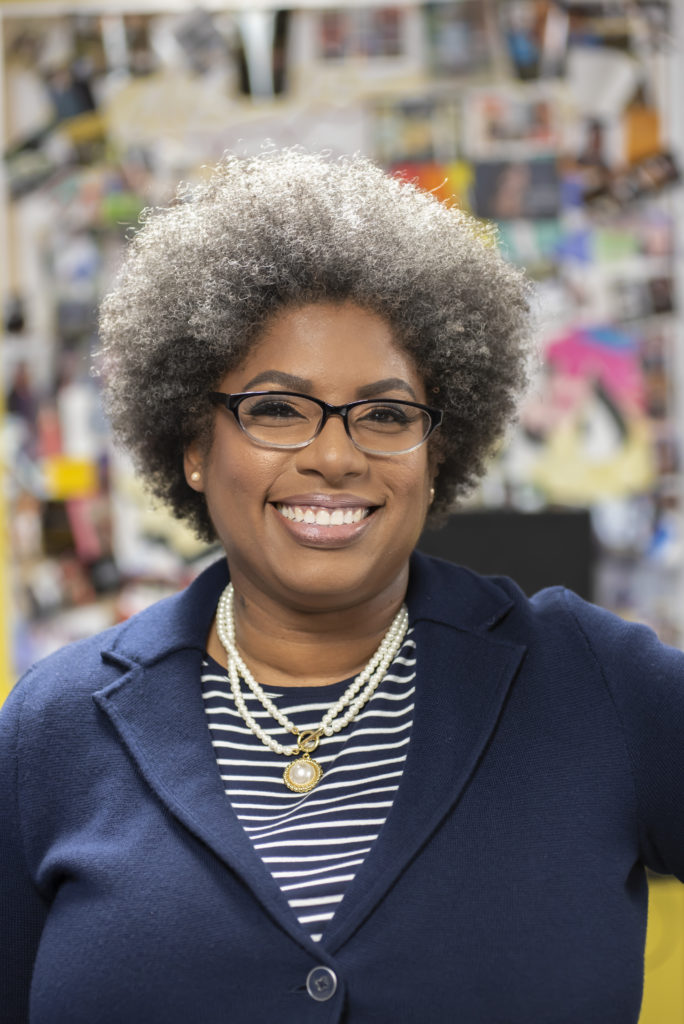 Stacey McAdoo’s love of teaching began in her childhood bedroom.

“One of my earliest memories is in my room,” she said. “I would line all my stuffed dolls together and I would play school. My little brother would be my only live pupil.”

An avid writer, McAdoo accesses knowledge through the arts and developed lessons to help her brother understand content from his classroom.

“I would tell him, ‘Try to turn it into a song,’” she said. “We would do those things at home to help him study.”

Outside of her room however, McAdoo distanced herself from her dream.

She says her community in Southwest Little Rock distrusted the public school system and the classroom felt like a different world.

“I think the distrust was ‘them versus us,’ the outsiders vs. the insiders, not seeing yourself represented, not having teachers that looked like you, not being able to see yourself in the curriculum,” she said. “We didn’t feel understood. We didn’t feel connected. We were just going to this place. That was the general sentiment in my community, it was like ‘These people don’t care about us.’”

McAdoo spent frustrating days in the classroom wondering why her teachers didn’t use the same strategies she employed to help her brother at home.

“I remember sitting in history class, and I hated history class and I shouldn’t have hated it because the text is so rich,” she said. “I would go and rewrite lesson plans and say, ‘If I were the teacher, I would do this and that type of thing.’”

When it came time to choose a career, McAdoo shied away from the path she’d seemed destined to follow, instead earning a degree in professional and technical writing.

“I fought it,” she said. “I was going to make more money… it was strictly a financial thing. I knew teachers were overworked, I knew they were underpaid, that they were losing respect in society’s eyes.”

But her day job at a telecommunications company left McAdoo unfulfilled.

“I’m working as an administrative assistant, and I know I’m supposed to teach,” she said. “I’m unhappy. I’m going to work every day, and I’m twiddling my thumbs and actually I’m still writing lesson plans and poetry and I’m doing this other stuff.”

On a whim, she applied to teach Middle School English in the Little Rock School District. During her interview with Nancy Rousseau, now Principal of Little Rock Central High School, McAdoo got a lesson on process.

“I didn’t even have a license,” she said.  “I didn’t know any of that stuff. She gave me her card and said, ‘If you ever decide to go to school and get credentialed to be an educator, I would love to hire you.’” 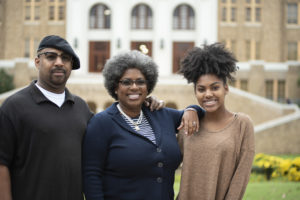 After her brother died in a car accident, McAdoo left her job and earned a Master of Arts degree in Teaching from the University of Arkansas at Monticello. Newly certified, she started preparing to teach Middle School English when Rousseau reached out with an offer to teach communications at Central High.

“My certification is communications, so it was perfect,” McAdoo said. “I’ve been here ever since.”

Finally where she was meant to be, McAdoo didn’t waste any time putting her lifetime of prep to use.

“I don’t want to make it sound like I’m just perfect and it’s been all peaches and cream… but for real I’ve been rocking and rolling since I entered the classroom,” she said. “I go in my classroom and we make magic happen.”

Her first year also marked the beginning of the Writeous Poetry Club, bringing a poetry magazine she had created to life through her students. The teens write and perform original poetry, including

a group poem imagining the inner monologues of members of the Little Rock Nine and another following terrified students’ thoughts as they experience  a school shooting.

“What people don’t realize… they see the students up there and think it just comes naturally to them,” McAdoo said. “They practice all the time. They’re in my classroom right now practicing. They spend as much time on their work, as they do anything else.”

McAdoo says other teachers are sometimes surprised to find out students are performing original pieces on stage.

“That is not the kid they see in the classroom,” she said. “For a lot of the students, the Writeous may be the first time they’ve had success. They’re not all necessarily academic stars, although there are some academic all-stars. They’re a very eclectic group that comes from all walks of life.”

While some of the students are working toward making a living from their poetry, McAdoo says the process is valuable even without a bigger goal.

“At the end of the day poetry is about expression,” she said. “It’s about discovering who you are. You can’t contribute to society if you don’t know who you are.”

After 16 years in the classroom, the magic earned McAdoo recognition as Arkansas Teacher of the Year for her work teaching communication and Advancement Via Individual Determination (AVID). McAdoo doesn’t have an easy answer for how she developed the teaching style that earned her 2019 ATOY.

“I don’t know,” she said. “But I went in the classroom and just tried to do what it was that I wanted when I was in school and tried to incorporate the things that I felt I needed or that would have made school more enjoyable for me.”

At the time of her award, Arkansas Department of Education (ADE) Commissioner Johnny Key commended her for a teaching style that sounds remarkably similar to the strategies she developed as a child to help her brother study.

“From incorporating rap and slam poetry in the classroom to utilizing creative opportunities that foster parent, community and civic engagement, Ms. McAdoo serves as a model of excellence for all Arkansas teachers,” Key said. “She gently guides her students to think outside the box and challenge stereotypes.”

The months long process to select teacher of the year includes multiple rounds of competition, beginning at each school building, then district and region. Semi-finalists then teach during an on-site visit by the ATOY selection committee.

“At the very end there were… I want to say there were 10 or 12 people that came to watch me teach at one time in a little box with 24 students,” she said. “We were crammed in there and they were like,  ‘Be natural.’”

“They didn’t have any personality,” she said. “They were trying to ‘be good’ and I was like, ‘No! I got this because y’all are not just these perfect little robots. Just be who you are!”

With the recognition comes a year of service beginning July 1, 2019. McAdoo is working with the ADE to develop what that service will look like.

“What I’ve been told is that everyone’s year looks different,” she said. “It’s pretty much a mixture of offering professional development to teachers, doing classroom visits and working with ADE on initiatives.”

She will also sit on the State Board of Education once a month, which voted to take over the LRSD in 2015, and has since voted to strip Teacher Fair Dismissal and the Employee Fair Hearing Act protections from district employees. The move sparked a wave of protest throughout the community, leaving McAdoo to figure out what it means.

“I was announced at the beginning of the school year, but while I’m being announced as Arkansas teacher of the year, my colleagues are trying to figure out, ‘Will we even have a job the next day?’” she said. “That’s going to be very difficult. I don’t think anyone has been in this situation before.”

“My students were like, “Mrs. McAdoo, you’re being quiet. We don’t hear your voice. You teach us to speak up and speak out, what are you doing?” she said. “I had to explain to them I was being quiet, but that is my nature. I’m quiet until I feel it is time. Sometimes I’m slow to respond, because when I do speak, I need it to be powerful. I need it to be meaningful and I need people to realize, ‘She’s serious.’”

She says the last year has been one of the most challenging of her career, as she tries to keep a balance between staying engaged and preparing to work in a new role.

“I still am very reserved because I do recognize that I am representing the entire state and that I will sit on the board with these individuals,” she said. “I don’t want to tarnish any possible relationships that  I could have prior to going in there but I also don’t want to be a doormat either, or for people to think I’m ok with this because I’m not.” 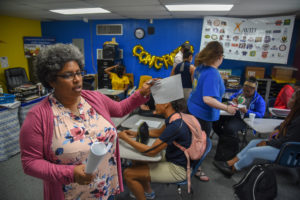 The distrust McAdoo’s community felt when she was a student remains, and may now be stronger than ever, as people use the internet to share information and photos of the condition of school buildings and supplies in the district.

“These students are talking to everybody everywhere, so it is very easy to see the inequities,” she said. “Now we see certain pockets that are getting things it appears other pockets are not. Growing up, I don’t think we saw that. We only saw what was going on in our area, so we didn’t know there was a huge disparity. Then, I think we knew it, we just couldn’t put our finger on and say here it is, this is how we know this. We knew it we just didn’t necessarily have the language or the evidence to support what we inherently knew and felt.”

Before her recognition, which allowed her a new level of access to the ADE, McAdoo says she felt the department was intentionally doing things to make life harder for her and her colleagues. After visiting and meeting with staff and leadership though, she believes everyone is trying to increase student opportunity.

“I don’t know if the disconnect comes from the many different layers it goes through before it gets to the classroom teacher, but everyone seems genuine,” she said. “I think a lot of people just have different ideas about what’s good and what’s just, and what people need. Everybody seems to think that they have the answer, and they’re not including those other people in those conversations.”

While she understands she is representing more than just Little Rock now, McAdoo says she still is Little Rock, born and raised. From the bedroom classroom where she taught her first lesson, to her award-winning style at Central High, this is the background McAdoo brings to her role as Arkansas Teacher of the Year.

McAdoo may not be sure how the year will play out, but she is positive she’ll bring the voices of her students, fellow educators and her community to the table.

“My students are so happy, and part of that is, ‘We’ve got somebody who knows us, who understands,’ and they’re expecting me to speak for them,” she says. “They’ve given me a long list of things, you know, ‘When you go to ADE, we want you to talk about this!’ The students have ideas and they want to be heard, so I  am looking forward to sharing their ideas and concerns.”