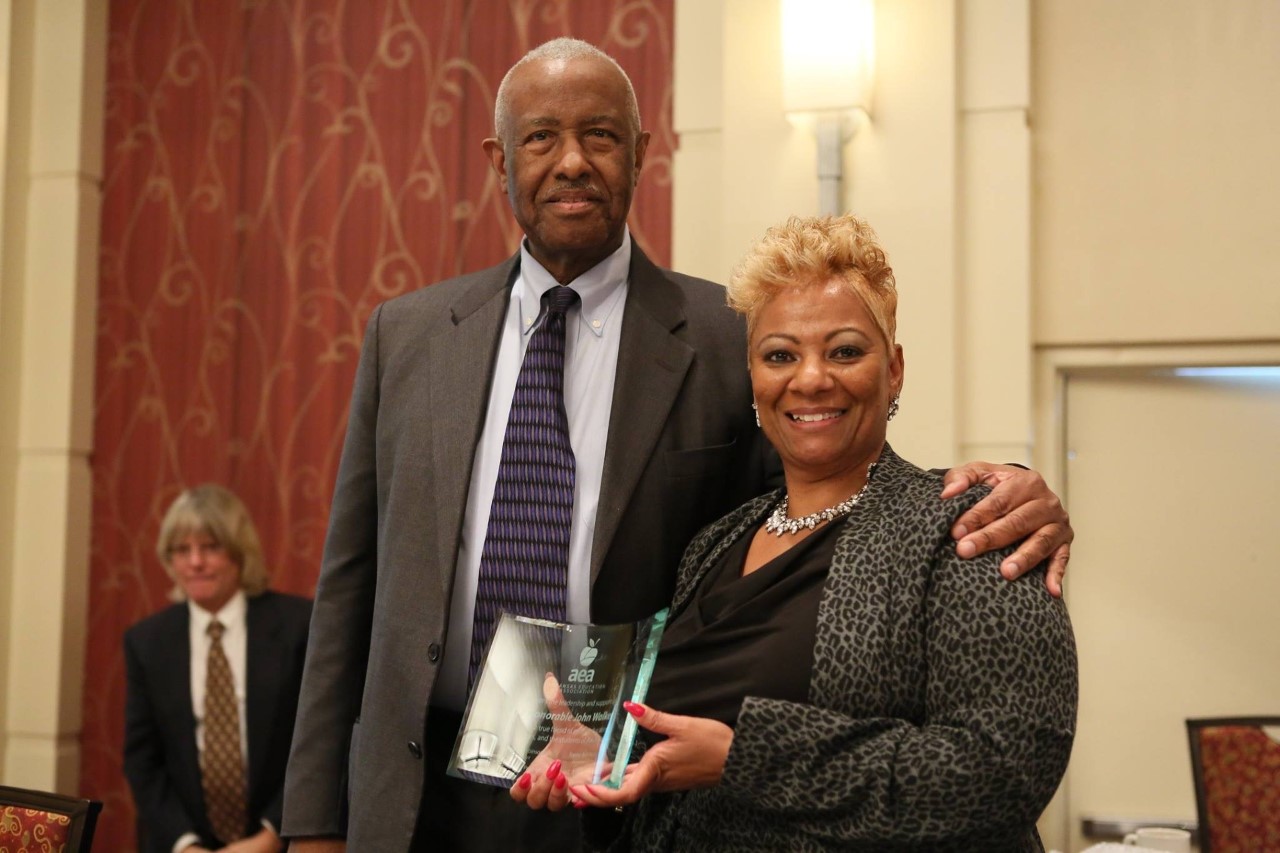 In 2015, then AEA President Brenda Robinson presented Representative John Walker with the AEA Friend of Education Award for his decades of commitment to improve public education in Arkansas.

LITTLE ROCK— The Arkansas Education Association mourns the loss of Representative John Walker.  Representative Walker was a towering civil rights and public education advocate.
“Public education lost a champion today,” said AEA President Carol Fleming. “His tireless efforts and commitment to ensuring the doors of opportunity are open for all will never be forgotten.”
Mr. Walker’s work with AEA began as a young courageous attorney working with the Arkansas Teachers Association (ATA) which was an organization that fought for racial equity for African American students and educators from 1898-until its merger with the Arkansas Education Association in 1969.
Attorney Walker was a champion of African-American teachers in Arkansas who were treated unlawfully in employment matters.  African-American teachers were systematically and substantially discriminated against in salaries, which was constitutionally impermissible. Mr. Walker established an enviable record on cases won in and on appeal to the U.S. Eighth Circuit Court.
He also advocated for African-American students in Arkansas, in a desegregation case that continues to have implications today. Mr. Walker represented the intervener groups – Joshua Interveners, representing African-American students and families, and Knight Interveners, representing employees in three school districts in central Arkansas.
He was appointed to the State Board of Education by Republican Governor Winthrop Rockefeller but was never seated after the state legislature refused to confirm his appointment.  Had he been seated, he would have been the first African American man to serve on that Board.
Undeterred, he ran for and was elected to the House of Representatives in the Arkansas General Assembly in 2010 and served on the House Education Committee until his death. In his role as a lawmaker, he garnered the admiration and respect of allies and opponents.  He used his platform as a lawmaker to continue his life’s work as an outspoken advocate for public education, students, and educators.  Representative Walker frequently visited the well on the House floor to serve as a voice for those who often are not represented at the decision making table.
In 2015, Mr. Walker was recognized for his decades of commitment to improve public education in Arkansas and was awarded the AEA Friend of Education Award.