Inside the web of Arkansas’s School Privatization Empire 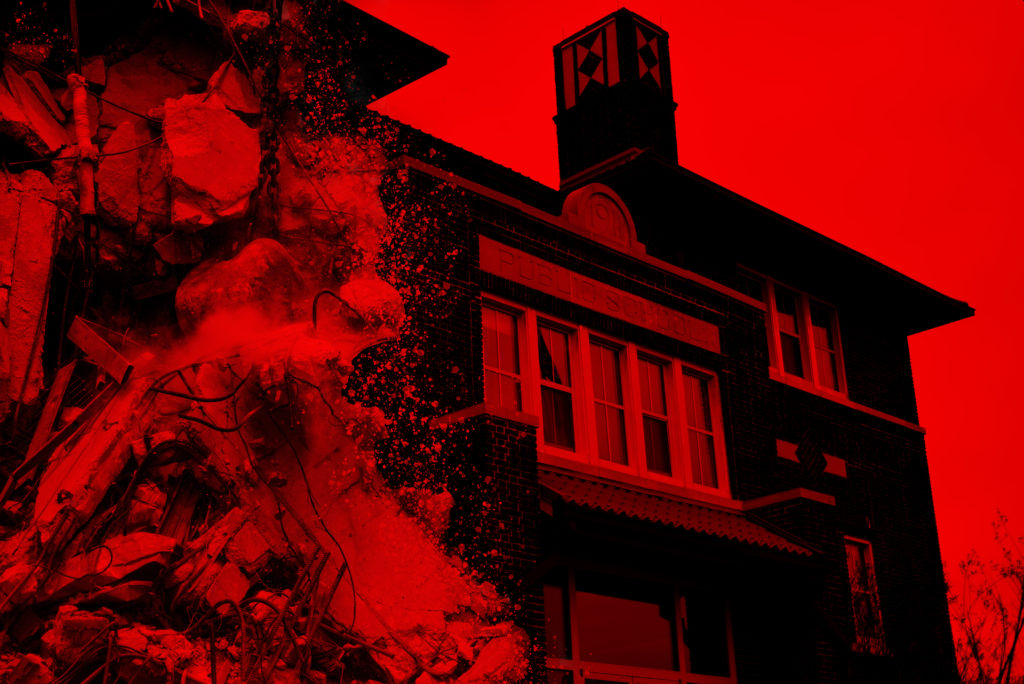 A free quality public education for every child is a foundational principle of American society and a right guaranteed by Arkansas’s Constitution. Everyone in this state, regardless of religion, race, income, disability or any other characteristic deserves an equal opportunity to learn and succeed.

Unfortunately, a vast network of corporate interests and wealthy individuals are chipping away at this bedrock of our democracy in an effort to turn public education into a marketplace where private interests can profit off of our students.

Across the nation, states have implemented and expanded charter schools that are unaccountable to the public and voucher programs that have siphoned off public taxpayer money to pay for private school tuition.

This powerful and well-funded effort is nationwide, but one of the biggest contributors is based right here in our state, and each year the network of privatizers working in Arkansas is growing.

This network uses pass through organizations to fund a swarm of lobbyists and spend dark money on political candidates in our state and across the country. They initiated the recent attack on the Arkansas Teacher Retirement System, and have even co-opted our state’s flagship University to provide cover for the work of partisan think tank alumni who misuse statistics in support of a privatization agenda. They have close ties to members of the Arkansas State Board of Education, and their influence is part of the reason Arkansas’s latest legislative sessions have focused more on privatization schemes like vouchers and charter school expansion rather than the investments we know will actually improve outcomes for Arkansas’s 486,000 public school students.

This article is a look at just some of the connections in our state. It is important to note that this report is not exhaustive. The web of dark money and organizations working in Arkansas and across the country to plunder public school resources is vast and difficult to track.

The Walton Family Foundation (WFF) and many of its grantees are the major school privatization players in Arkansas and even one of the biggest in the nation. WFF is led by the billionaire heirs to the Walmart fortune. The Bentonville, AR based foundation gave away nearly $600 million in grants in 2018. According to its website, the foundation has invested more than $400 million dollars to expand charter schools since 1997. They, along with other privatization supporters have also dumped vast fortunes into think tanks, opinion outlets posing as media organizations and political races, including more than $50 million dollars in a failed attempt to install a charter supporter as the new California Superintendent of Public Instruction.

WFF has an application process like many foundations and gives to a large number of causes including so called “education reform.” In fact, K-12 Education is one of their top priorities, along with the “Home Region” of Northwest Arkansas and the Arkansas Delta.

For example, Arkansans for Education Reform Foundation received $435,000 in contributions in 2017, $350,000 of this revenue came directly from the Walton Family Foundation. Their board includes the publisher of the Arkansas Democrat Gazette, which regularly prints pro-privatization editorials, a former CEO of Murphy Oil, and a member of the Dillard family. The board’s only paid member, Executive Director Gary Newton, is paid more than $189,000 plus benefits.

The organization also gave $115,000 to Arkansas Learns where Newton serves as President and CEO. Arkansas Learns’ board has the same members, plus Arkansas Chamber of Commerce President Randy Zook. Zook is married to the new Chair of the Arkansas Department of Education, Dianne Zook, who is also Newton’s aunt.

In 2017, WFF gave the Reform Alliance a nearly $1.5 million grant. The Reform Alliance then paid Lee’s company Trace Strategies $180,000 for “Campaign Advisory” services. It should be noted that Lee’s daughter also works at The Reform Alliance, and the nonprofit’s principal address is listed as Lee’s home on the Arkansas Secretary of State’s website.

The organization also receives a percentage of the taxpayer dollars it manages for administration. The Reform Alliance also lobbies for pro privatization legislation, and the “Succeed Scholarship.” This voucher program has been expanded every year since it was first created. In the 2019 Legislative Session, the funding was doubled to $3 million dollars, despite lawmakers acknowledging there is no way to determine if the students participating in the program are receiving a quality education. Lawmakers also passed a bill to study the program, but elected to increase in the amount of public tax dollars that can be spent on the program by $1.5 million before the study could begin. The Governor has since approved $1.8 million in funding for the program, and is expected to fully fund the $3 million appropriation. To be clear, this means the state is handing millions of your tax dollars to a nonprofit with no transparency and which hired its own chairperson as a contractor. 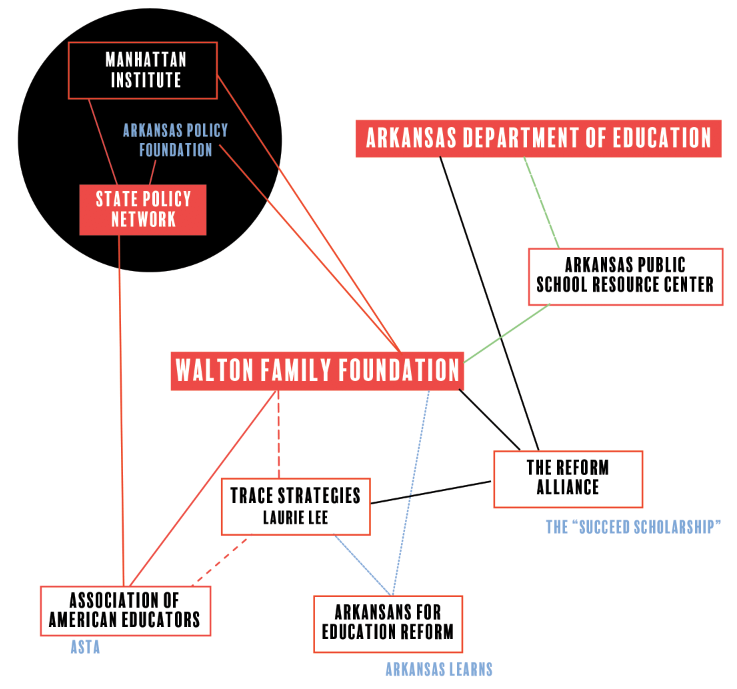 This linkage is important for two reasons, firstly because it highlights some of the strategies used to control the discourse surrounding the needs of our children and because it shows how key players in this space receive funding from the Waltons through multiple sources. So, what first seems like the spontaneous creation of a grassroots working group of concerned citizens, is more like astroturf paid in full by the pro-privatization empire.

While it is no surprise the Walton’s can afford teams of lobbyists at the state Capitol, some educators may not realize they may also be contributing to the problem.

The Arkansas State Teachers Association (ASTA) bills itself as the “non-union” professional association for educators. ASTA is the local affiliate of the Association of American Educators (AAE). AAE was created by insurance billionaire Gary Beckner, who saw an opportunity to sell insurance to educators. While claiming to represent teachers’ best interests, these organizations operate as a vehicle to disrupt school systems by breaking up collective teacher voice. Sourcewatch states that the AAE is funded in part by the Bradley Foundation as part of an effort to “defund teachers unions and achieve real education reform.”

Trace Strategies also lists AAE as a client on its website, which means the same lobbyist pushing to expand public funding of private schools in our state is also representing ASTA members. In addition, the Walton Foundation has given millions of dollars to the AAE Foundation, including $200,000 in 2017.

AAE also produces a pro-privatization newsletter, and its foundation is an associate of the State Policy Network, alongside the American Legislative Exchange Council (which writes pro-corporate legislation for lawmakers to use), the Reason Foundation (which was part of the attack on the Arkansas Teacher Retirement System) and the National Right to Work Legal Defense Fund (which has used the courts to attempt to weaken educators’ collective voice). WFF also gave the State Policy Network nearly $120,000 in 2017.

Another organization working to privatize the education system is also collecting membership dues from some public school districts. The Arkansas Public School Resource Center offers Walton funded grants and professional development opportunities to charter schools and rural public school districts. In addition, APSRC lobbies at the state Capitol and at the Federal level for privatization legislation. The US Department of Education, under Secretary Betsy DeVos, recently awarded APSRC more than $20 million in tax dollars to expand charter schools in Arkansas. The board of APSRC includes the Speaker of the House, President of the Senate, Jim Walton, Randy Zook (head of the state chamber) and Fitz Hill, (former president of Arkansas Baptist College which operated a Walton-funded charter school on its campus) a current member of the State Board of Education.

In addition, DeVos’s dark money group American Federation for Children has now appeared in Arkansas and paid for ads in the 2018 election attacking candidates who stood strong for students in opposition of vouchers during the 2017 Legislative Session.

According to a 2018 national poll, a strong majority (70%) of public-school parents give the traditional public schools in their neighborhoods either an A or a B – higher grades than they have given in years. However, the public more broadly gives only 4 in ten local schools an A or B and even fewer think give top grades to public schools nationally (19 %).  2019 PDK poll

What is behind the disconnect? A decades long propaganda attack on educators and public schools, led by those who wish to shift to a market-based system. Creating alternative facts through the infiltration of institutions of higher education and funding think tanks is another tactic pro-privatization organizations are using.

Much like the tobacco industry sponsored research to misrepresent the health effects of smoking, these organizations twist data in an attempt to justify shifting public dollars away from neighborhood public schools and into private or charter options. These think tanks are operating all over the country to provide cover for policies the general public does not support.

The University of Arkansas Fayetteville – Office of Education Reform was founded in part by a $10 million gift from the Walton Family. This branch of our flagship state university consistently produces pro privatization policy papers as well as leaders in the privatization movement. The department is headed by Dr. Jay Greene, who came to the school from the Manhattan Institute, a pro-privatization think tank that also receives Walton funding and is an associate of the State Policy Network. Greene also sits on the advisory board of ASTA’s national affiliate.

Two faculty members at the Office of Education Reform currently preside as officers on the board of the Advance Arkansas Institute (another member of the State Policy Network). Further, many graduates of the program end up working at the Walton Family Foundation, pro privatization think tanks, and perhaps most alarmingly in top posts at the Arkansas Department of Education.

The U of A department also includes the “Office of Education Policy” or OEP, which just this year hired another Manhattan fellow who came from the Laura and John Arnold Foundation. This foundation, along with the WFF funded the groups that made special trips to Arkansas to support and testify during a legislative hearing in favor of policies that seek to undermine the Arkansas Teacher Retirement System. The ATRS is a vital recruitment and retention tool to ensure quality teachers.

The Pew Foundation, the Reason Foundation and Bellwether Education Partners were invited to testify before the joint retirement committee by a lawmaker in 2018. During testimony attacking defined benefit plans in favor of 401(k)s, legislators forced each of the groups to admit on the record they received funding from the Arnold Foundation. In addition, a staff member from the UA’s Department of Education Reform participated in the attack. While the groups have been successful in other parts of the country, including Kentucky and most recently Colorado, Arkansas legislators stood strong with our state’s educators and shot down every piece of anti-retirement legislation filed as a result of the effort. 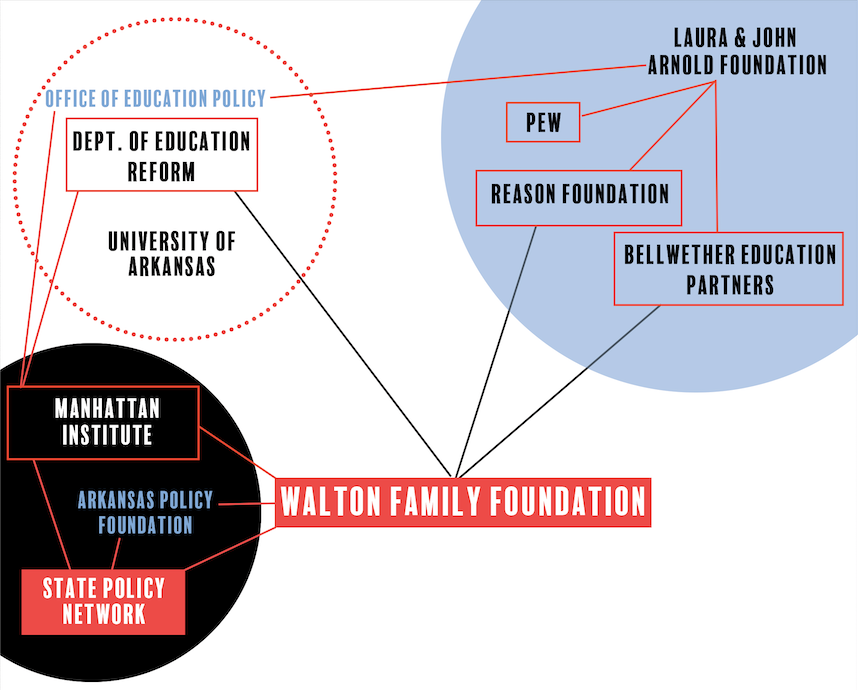 Although this report includes a lot of names, it is just one slice of the nationwide effort to plunder our public schools. These organizations have a vast infrastructure and deep pockets that can seem daunting, but our students are counting on us to stand up and speak out.

While they may have more cash, we have the power of numbers and common sense. Arkansas’s taxpayers and students would be better served by investing our scarce resources to improve our neighborhood public schools and helping all of the students who attend them.

Our public schools are the anchor of our communities, and the best way to expand opportunity for all. This idea does not require twisted statistics, or market tested language to trick people into supporting it. It’s as old as the country itself.