Arkansas works to promote the profession

WHEN VICTORIA GROVES-SCOTT TOLD HER PARENTS SHE WANTED TO GO TO COLLEGE, SHE WAS MET WITH HESITATION. 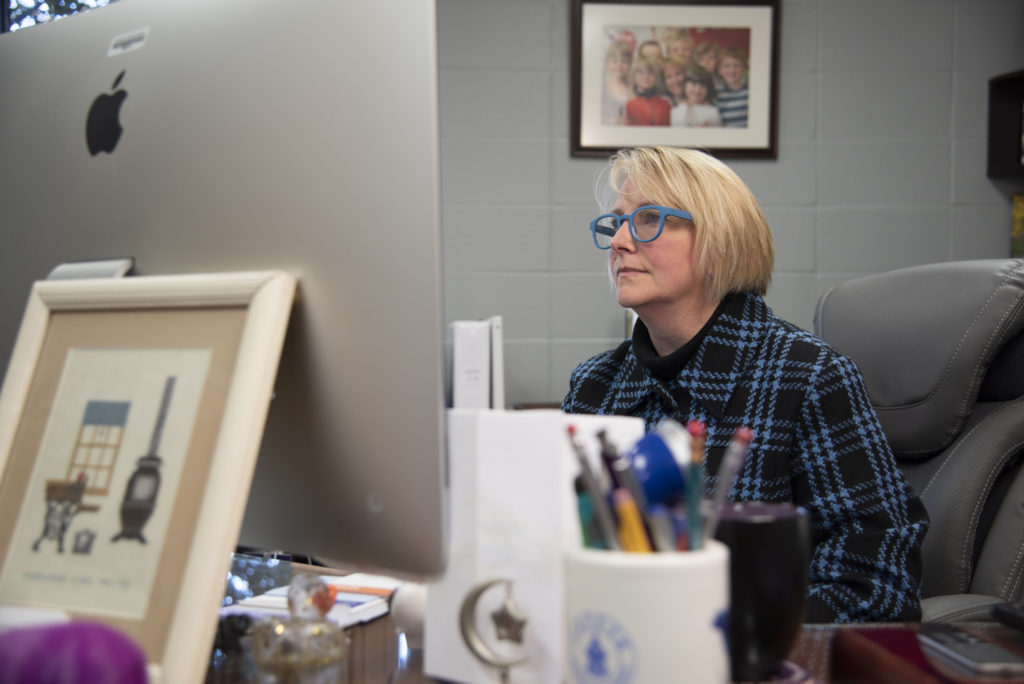 “I’m a first-generation college student,” she said. “They said, ‘Nah, that’s not really for us, baby. You know, nobody in our family’s ever gone, we don’t know how we’d pay for it.’”

But when she added that she planned to become a teacher she saw an immediate change.

“’Oh, our daughter’s gonna be a teacher,’” her parents responded. “They were so proud of that. When I went into education 30 some years ago, a long time ago, it was a profession that people respected and admired and supported.”

“When education became more about test scores and data and less about students, we started putting blame on teachers, wrongly of course,” she says. “And the standard of living for teachers has not gone up.”

The teacher pay gap has increased dramatically compared to other professions with similar education levels, and the cost of college is rising. Across the nation, but particularly in states like Oklahoma and Arizona where educators have long been frustrated or deterred by a lack of classroom resources and extremely low pay, the teacher pipeline is drying up.

“Most of us are still 15, 20 years down the line, we’re still paying college debt,” Brooks said. “For all the money that you put into college, you can go to another

Governor Asa Hutchinson has announced plans to increase minimum teacher pay by $1,000 each year for four years, however the proposal only helps teachers in districts currently paying the minimum salary scale.

“The pay scales don’t move up very much,” she said. “We might get a new educator there for a couple of years, but a lot of families can’t sustain that. They have children and they want a house and a car and to pay off their school loans, so they leave teaching and get a job as a real estate agent. We lose them and then we have to produce more teachers to fill those gaps.”

Groves-Scott has seen the pipeline issues play out first hand, both in her professional life as Dean of the College of Education at the University

of Central Arkansas, and as the mother of a college student.

“I have an older son who’s in Alabama,” she said. “He kept saying, ‘I want to be a teacher,’ and everybody kept saying, ‘No, don’t do that. Your test scores are

really high, you could be a… blank. It is too much work. It’s a really difficult profession. Do you realize how much less money you’re going to make?’”

Groves-Scott encouraged her son to make his own decision, and eventually, he decided to finish his teaching degree. She’s working together with the Arkansas Department of Education’s Teacher Cadet program to encourage students here to do the same. During the 2013-2014 pilot year, five schools participated in the “grow your own” teacher recruitment program. Since then, the program has increased exponentially to include 74 schools, 22 colleges and universities, and 800 students this school year.

“I’ve got a faculty member who’s assigned to all of those Orientation to Teaching classes,” Groves-Scott says. “She visits them. We bring them here for a field trip. We send them UCA t-shirts. We Skype in on a regular basis. The students can send us questions, and we answer those questions. It’s a really engaging process between the high school and the university.” 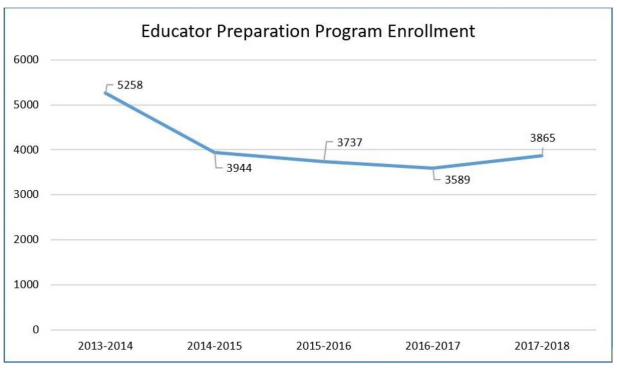 The Teacher Cadet program is just one part of the ADE’s statewide effort to promote the teaching profession and increase the teacher pipeline, and it’s starting to pay off. According to the U.S. Department of Education Title II data, enrollment in Arkansas educator preparation programs not only increased for the first time in more than five years, but enrollment numbers for 2017-2018 were also higher than two years prior. Last year’s enrollment reflects an increase of 128 students compared to 2015-2016 and a reversal from the downward trend seen in previous years.

“In order to transform Arkansas to lead the nation in student focused education, we must have a strong teacher pipeline,” Arkansas Department of Education Commissioner Johnny Key said when the numbers were announced. “Through our efforts to strengthen partnerships with educator preparation program providers, along with the launch of our Teach Arkansas campaign earlier this year, we are seeing success.”

In February 2017, the ADE launched the Teach Arkansas campaign to encourage more Arkansans to consider joining the teaching profession. The campaign focuses on three areas: teacher recruitment, support for existing teachers and encouraging educators to return to the profession.

“We’re up a little bit in Arkansas, which is really positive,” Groves- Scott says. “Hopefully we will maintain those gains, but we have a long way to go. That’s kind of a pipeline issue, but we also have the issue that compounds the problem with teachers not staying in education.” 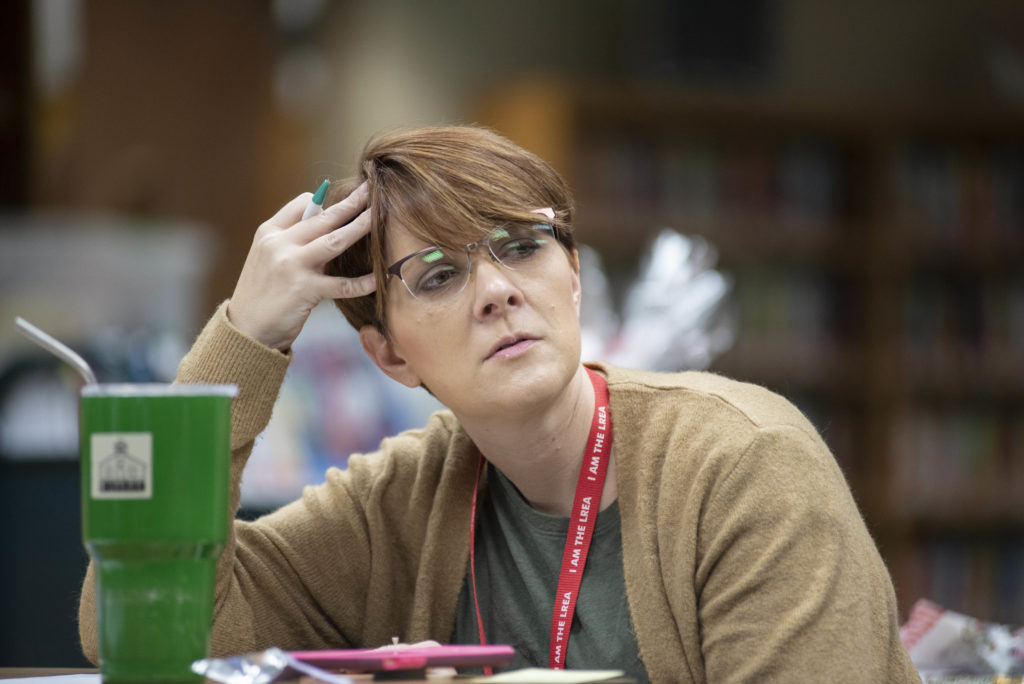 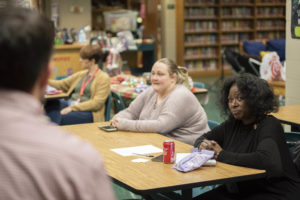 LREA VP Brooks says providing that support for new educators is also an opportunity for local associations to strengthen ties with people entering the profession.

“There’s a learning curve for new teachers and you want those teachers to come in and to stay, because the longer you stay, the better you are at teaching,” Brooks said. “Those one to five years is really when those teachers are going to make up their mind whether or not they’re staying.”

“Especially in our highest needs schools, we see a lot of turnover,” Brooks said. “Our newest teachers end up in those schools and with our neediest students. In order to best serve our students, we need to make sure we serve those teachers.”

After asking early career educators how things were going, the local worked with the school district to establish a monthly meeting and professional development opportunity geared toward new educators through a grant from the National Council of Urban Education Associations.

“We wanted to provide them with not only professional development that was relevant to them, but an opportunity to make connections with other people, not only with other early career educators, but other veteran teachers that are in their areas,” she said. “They can make connections and exchange information and help each other out.”

While the efforts to recruit and retain educators seems to be paying off, Groves-Scott warns that the shortage has also spurred more problematic actions, including the use of Act 1240 waivers to waive teacher licensure requirements. Act 1240 allows school districts to apply for a waiver to state education standards, including teacher certification.

An Arkansas Department of Education 2015–16 supply and demand report found there were 337 vacancies or long-term substitutes serving as the teacher of record. In addition, another 1,184 teachers were teaching on waivers and were not certified for the subject they were teaching.

“The most important factor in students going to school and doing well in school is their teacher, how well prepared their teachers are,” she said. “If you look at those Act 1240 waivers and you map those out, you’re going to find those in districts that are poor, and often the intersection of poor and African American.”

As districts struggle to fill empty positions, many students end up in classrooms with unqualified, or underqualified instructors.

“We have a lot of kids who are in districts in high need, and they are getting people—I wouldn’t even call them teachers—people who are not trained to be teachers,” Groves-Scott said. “That is a problem for us. We can do better. We absolutely can do better.”

Despite the challenges facing the profession, Brooks says students are expressing interest in becoming educators, and the recruitment efforts give them a chance to see if the fit is right.

“They see those of us who are in it love our jobs, love what we do, and that’s why we do it,” she said. “I think [the Teacher Cadet Program] helps a lot too, for them to kind of go around and see what it’s really like and try it out first, which is great for any profession to kind of get your feet wet.”

Groves-Scott says the new graduates are even better prepared for success when they begin leading their own classroom.

“Our programs, I think, are significantly more rigorous than when I went through the program a long time ago,” she said. “They’re going to have a lot of experiences. They’re going to be in the field really often. They have an opportunity to decide if this really works for them or not. They’re high quality students and they’re going to be really good teachers.”

And it takes a truly passionate person to head into the field with eyes wide open.

“They recognize that it might be a tough road but they’re ready to take that on,” she said. “They don’t always do it for the money or for the praise from society. They do it because it fulfills something in them that they feel like it was their calling, their passion. They want to make a difference. Ask any of them. They want to make a difference.”